In this case it must be for back when I got the itch to install a PTG bottom metal in my 223 varmint I wasn’t thinking about magazine capacity. The whole intent was to eliminate the top loading of this BDL Remington and have magazines the AICS makes instead, well it all worked very well and at one point was going to do a tutorial on how this was all accomplished but as with many things I never found the time.

Just a little history of the double deuce plus three………purchased new and for many years it was graced with the factory wood then there was an itch that needed scratching and it wore a HS Precision police stock. After many years as a safe queen with this stock (hated it) it was sold and back to it’s original factory wood and now it has another BDL stock that I butchered for the bottom metal. I say that for it can no-longer be put back to the original BDL bottom metal so I decided (and here is another itch that needed scratching) to cut the barrel off and see if it would balance better, kinda like an urban tactical whatever. Well I must admit that 4 inches off the barrel made a huge difference, accuracy is better and it carries so much easier but now to use it for hunting here in Michigan I would have to use a single shot adapter or put it back into it’s original stock as a BDL.

Love the AICS magazines which now are discontinued and they do not make a 5 round mag for this configuration so after searching I found a Co. that is making a compatible/ comparable magazine t fit so I ordered 2 of these 10 round mags to see if I can cut them down to 5 round mags.

The above is the replacement magazine dissembled, these mas are different than the AICS mags in that they have a taper rather than straight wall. In my first thoughts this was going to be a huge problem but the more looked at them and brainstormed the whole thing I found that it was just the opposite. MDTTAC.com

The above is the only method I could figure out on how to hold this in the mill vice, tapered front to back and from top to bottom makes it difficult to do something that doesn’t look wonkey. A set of parallels, small clamps, cedar shim stock jammed into the mag between the vice jaw and the whole thing was pretty solid.

This is my first time for using a slitting saw on the mill, just never had any projects that it was required until this one.

I have removed the bottom sections, to the base of the last rib for which is going to be milled to .085 in thickness so the original bottom can be reused.

The spring plate has to be inletted back into the bottom of the mag, this could be done with a file if needed as most of the work can be but if you have a mill or even a drill press with a cross slide table I believe it is doable.

Now the spring has to be cut, unfortunately this spring is tapered, here one is limited to only being able to cut the bottom of the spring as shown. This is not the most ideal way but for now it is all I can do. 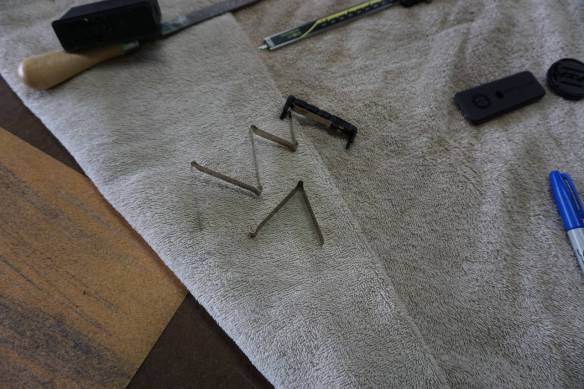 This shows what I cut off, as I stated it is not the most ideal for the tention is still a little bit on the stiff side, it is rough to get 5 rounds in but they still work. I am going to see if I can get replacement springs for these magazines in an attempt to modify them in a different fashion.

The last cut was to the bottom plate, it had to be cut on the back side so it would fit past the back corner of the PTG bottom metal. This fits and clips into place with very little room to spare.

When I started this my initial thoughts were that it was going to be a nightmare but as you can see it ended up being very simple to achieve a 5 round magazine with a low profile. If the stock hadn’t been butchered I would have changed the bottom metal to something else but that wasn’t going to happen.

Thanks for looking and if U have the same situation there is a cure………….

Just a note on the conversion, after completion of the rifle I had several problems with feeding. After much trial and error to figure out just what the problems were it ends up being the angle of the spring/ follower plus spring compression. I ordered two new springs in case mistakes were made (cutting more off than needed) , it wasn’t the case so extra springs are not needed. ( they charge an arm and leg for them too)

Also note that it would be better to only use 4 rounds in the magazine than 5 but 5 rounds do work other than it is tight.