When I posted the first lapping process I made the decision to omit lapping the body portion, the reasons are numerous and this is not an easy task. I should first state that the method I use is one of my own and not something handed down or something I read on the web but I suppose it could mimic what someone else has done, there are people doing this as a business, what method they use I do not know. The object of this was to end up with a sort of a bump die from a full length die, reducing the amount of sizing in the body section. I must say that it worked better than expected, so much so that I have used this method 3 other times over the last 15 years.

I embraced this project after reading an article many years ago about FL dies over working brass, we all know when dealing with factory chambers that the cases can grow considerably. The die manufactures and rifle manufactures all have standards to adhere to, the chambers tend to be on the large size where dies are on the minimum thus we blow them out and squeeze them back over working the brass and shortening the life.

.My first project was conducted on a .243 Winchester that was re-barreled from the original .243 sporter to a heavy barreled varmint, I had expected much more than I received. The .243 Winchester is notorious for brass flowing into the neck and with this monstrous chamber I had, it just made it worse.

I will not be picturing the process; I’ve decided to share what I have done and explain how it was done. The process is the same as lapping the neck except for the lap itself.

First, I start by firing 3-5 rounds in the chamber, those we are going to use as laps, 2 to start with and the rest spares.

Second, we want to measure a full length sizes cases from the die that is to be lapped and record those dimensions. It would be best to use new or relatively new brass to obtain more accurate dimensions; shot out brass is going to spring back more.

Third, on the fired case measure the body/ shoulder junction and the base just above the web where the case has expanded. Compare shoulder to shoulder and base to base of the fire case and FL case, let’s say for example the junctions are expanded .008 from FL sized, they both will probably not be equal but they will be within a couple thousands of each other.

Fourth, now let’s say we determine that we only want the die to squeeze the case back .003; I am using these dimensions as examples and not actual dimensions. This is what we will be shooting for at the shoulder/ body junction; it is at this point I am looking for a closer fit after resizing, the base will follow suit. Also consider the spring back, one can check the difference between old cases that have been shot many times and relatively new cases by sizing.

Seventh, with a cutoff wheel score the body of the lap (see picture for reference) to reduce surface contact and allow compound to wipe out.

Eighth, the method used in my previous page (Lapping Loading Dies) applies to this process also. The biggest problem one will face is that the lap will grab very aggressively so slow and easy is the method. Add some sort of cutting oil to the compound to keep it wet and a good slurry going so it doesn’t dry out. This will take much longer than just lapping the neck unless you are using dies that are not hardened. Clean and check progress often by resizing a fired case and taking measurements. 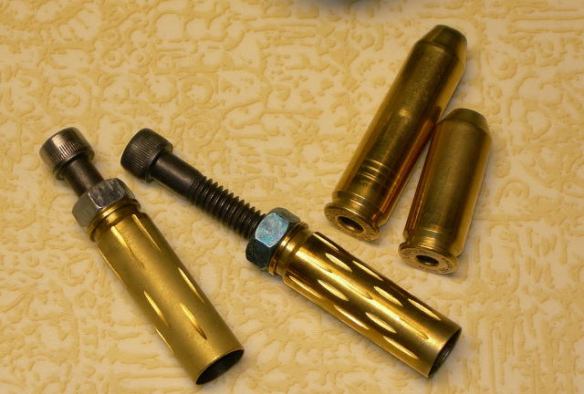 I have only used this method on factory chambers, the rifles that had acceptable accuracy for hunting or varmint use in general. This is by no means a perfect process, you go too far and the die is junk, same as lapping the neck portion. One also needs to consider spring back of the brass when dimensioning.  Finally when finished I use Flitz metal polish to bring the lapped die back to a mirror finish.

I have been thru the gamut of case sizing lubricants, RCBS, Imperial, Rooster Labs, solvent based, water based, wax types you name it I have tried it but I keep coming back to one product that never lets me down, Dillon Case Lube, I should be a spokes person for Dillon. There are several impersonators of Dillon’s Case Lube and so far none have compared, I tried Cabela’s version and it didn’t come close.

A close friend asked me to look at his 30BR cases; they had gouges the full length of the case all the way around, MAN they looked like &$%^!, he said I don’t understand why this is happening? I asked what he used for sizing lubricant, Imperial, my response was NFG! With that statement the argument began, I’m not arguing, I’ve been there and done that so if you don’t believe me that’s fine. He brought 3 dies to me that had brass streaks caked in them, one was a custom die he paid $150 for, I polished all of them out to new condition and said don’t use that stuff again, use the Dillon for you resizing. He didn’t listen and within 20 cases he was stripping brass and the dies were in the same shape as before I polished them out.

I know that Imperial is the preferred product for the BR community and many will argue my statement but I never had any luck with that stuff. In comparison, you can test for yourself, clean your die and resize a dozen cases with Imperial then clean the die and repeat the test using Dillon Case Lube. Note the difference in resistance; resistance induces stress thus work hardening the material, it doesn’t take much to work harden brass, just look at it cross-eyed and Heaven forbid, use carbide and don’t lube anything! Oh well, we are all entitled to our opinions, this is mine and I am putting it out here as food for thought.