This small project falls under the category of stuff at least I think it does. Over the years I have had to polish rusty bullets from time to time and what I didn’t like about doing it is that the meplat or hollow point would get filled with the cob media. This past fall I contacted a finishing company and ordered some #8 Cob thinking that it being much larger than the normal cob media used in case cleaning that it wouldn’t fill the meplat, well I ended up with 50# of this stuff with no change. While looking at different materials to de-burr and polish the salesman was asking questions and giving me ideas of things to use but most were too abrasive or my application. Through the tour he pointed to a bag of wooden blocks and said if you want these you can have them but like a dummy I said I have no use for them but thank you. Now, the more I thought about it the more I wanted to try those blocks, they were about 3/8 inch square and ¾ inch long so not wanting to go back and ask for free stuff I decided to make my own.

In the first picture I cut some oak boards into 3/8 inch square strips, just guessing as to how many I would need.

I then set up my table saw with a stop block set to cut ¾ inch length pieces. The harry part of cutting these is the blade creates enough wind that such a small part is blown all over and they come off the saw table like buckshot. Well after dodging flying blocks I decided that if there is a next time I would do them on the band saw.

After filling the bucket they needed to be cleaned up, get the fuzz and splinters off so I moved them into the house to my Dillon Vibratory Case cleaner and run them for a half an hour. I emptied that into a pail and blew them off with air; this did a pretty good job of cleaning them with out sanding, then put them back in, added some polishing compound and ran them for another 15 minutes. 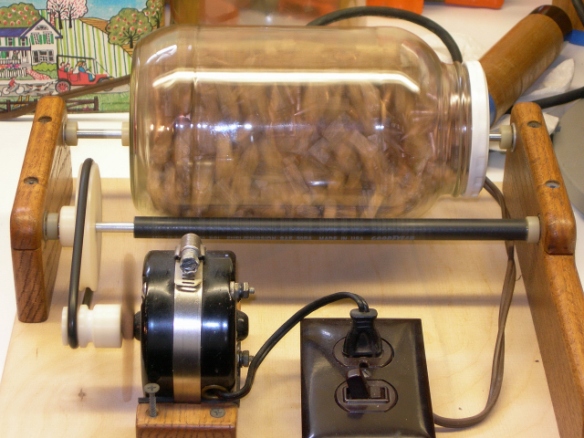 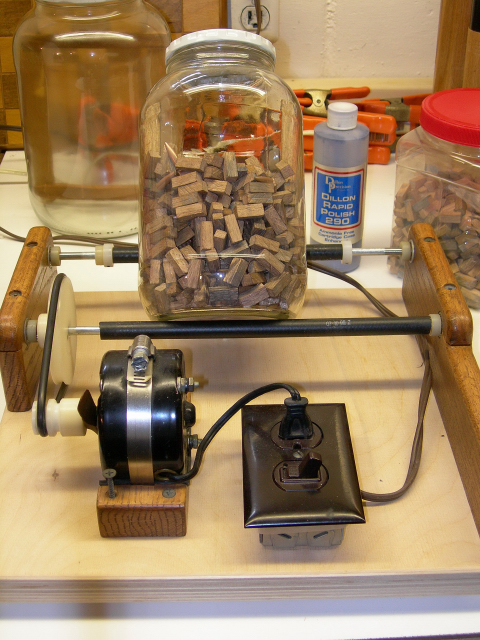 In this picture I filled the jar ¾ full with blocks and 300 bullets; they were run for 20 minutes. I use a glass jar for this operation so I can see how they move inside, it lets me add or remove the amount of media to change the action. This home built tumbler gets used more than my Dillon; it just seems to do a better job for a wide rang of items. After the 20 minute run I dumped them into a small pail, shook it to settle the bullets from the blocks them separated the two. I spread them on a towel to wipe them off for I added too much polish to the blocks but it didn’t take much to clean them.

This is the final product, as you can see there isn’t anything jammed into the nose of the bullet. I have now cleaned over 2000 bullets with no discernable wear to my blocks, they look as though they’ll last me a life time. I know that there are probably many different methods of cleaning/ polishing bullets but all I have tried in the past were unsatisfactory for me. I now have some rusty bullets to try and hopefully this method will work on them.