First off when I make bullets I normally do them in batches of 500, the exception to that was when I made 22’s. From reading articles over the years many bullet makers wash there jackets, so far I have not found a reason to do that, not that I am a definitive authority on this but I do not find it necessary, you may have a different preference. I have assembled what is necessary for the jacket prep and lube operation, scales, lube, mesh laundry bag (from dollar store), tumbler and jackets.

What is necessary is to shake out the fine copper shavings, which are done by putting them in a mesh bag and tumbling them by hand. I do this before weighing them on my high tech scale, yup found this in the junk but it works. I clean a couple of jacket buckets so when I dump the jackets in after tumbling I can make sure that all shavings have been removed, if not I re-tumble. At this point I weigh out 500. 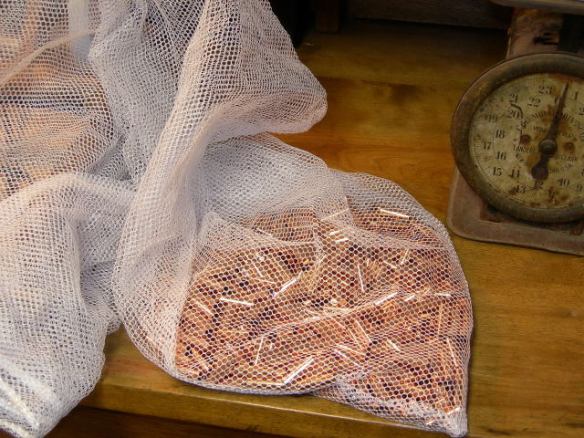 Next I weigh out the amount of lube on a piece of waxed paper on my Dillon scale; this is a necessary step in maintaining consistent lube from batch to batch. The lube is wiped on the walls of the drum (I like the old pickle jar so you can see what is going on) and jackets are placed inside. When weighing lube the scale is zeroed with the paper on it first and after the lube is in the drum the paper is weighed again, in the pic my scale reads 7.2 or something for after wiping as good as you can it will weight 2 grains heavier than zeroed, you can never get it all off. The amounts I use are not by any means law, if the jar is not cleaned the amount used is adjusted to a lesser amount, I have done it enough times to be able to tell how much by feel. Jackets are tumbled and timed for 20 minuets; I feel this is adequate for coverage, after that I will test a couple in the press to see that there is enough lube on them for this operation. In all the times I have lubed jackets there is only one time I didn’t have enough, if you have too much lube they can be tumbled with some pieces of cut up tee shirt to remove the excess.

Next I place the lubed jackets in MTM P-100-9 ammo boxes, this method came form the late Ray Wild, and I have just continued it this way since I started making bullets. For the budget minded or doing small runs such as I do I cannot justify bullet boards, they have advantages but so do my ammo boxes. I can load the boxes, snap the cover shut, put them on the shelf and not worry about them getting contaminated; also they can sit there for long periods of time before finishing. I took an old MTM ammo box lid, cut it out so it conformed around the P-100-9 box so that lubed jackets can be dumped and shaken, most will drop in the slots right side up. Loading the box this way saves considerable time, I use a pair of tweezers to finish what holes are not filled and to reverse the few jackets that are upside down. All lubed jackets are loaded before going to the next operation of dropping in the cores which takes clean hands so as not to contaminate them, once there in we are ready for core seat. 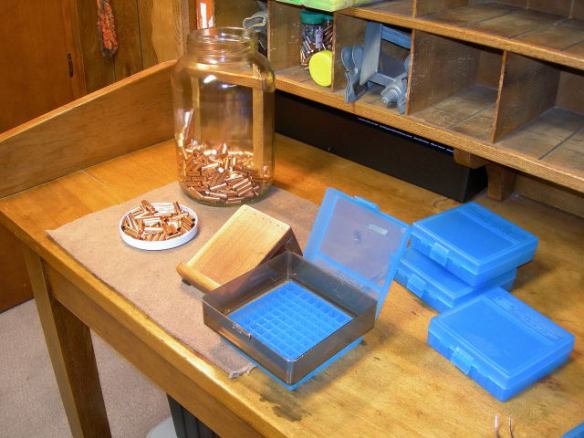 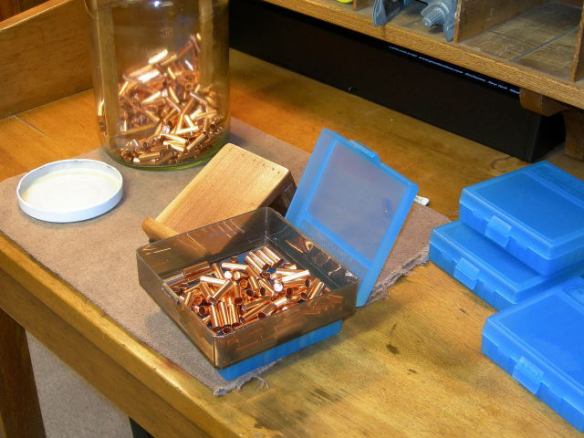 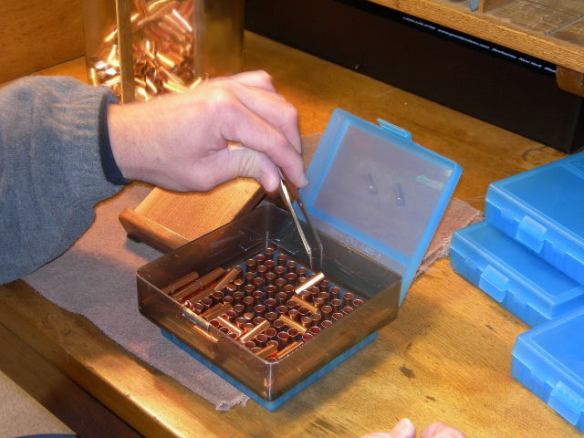 The next photos I am in the process of setting-up the core seat die, determining which punch is needed for this operation. This is a new batch of jackets and I am finding that the punch I used the last time is too small for this batch. Once I have this set-up completed I will move on and drop the cores into the jackets making them ready for the seating operation. I cannot emphasize enough of maintaining a clean area, clean hands and anything that may be dropped is put aside to be re-cleaned before swaged. I have had some foreign materials get into my die in the past and caused much grief but fortunately it didn’t do any damage so the phrase “cleanliness’ is next to godliness” applies here.

In this operation (core seat) I am going to make some statements that some may not agree with, I have tested all this over the last 11 years. First, in my opinion the emphasis of having .0002 between punch sizes is BS, a more realistic dimension is .0005, the punch needs to have enough space as not to scrape the jacket during this operation and close enough as not allow the lead to bleed by too much, if there isn’t some bleed by you are trapping air. Second, a common fault is to have the punch fit too tight with too much pressure hence trapping air, they pop the jacket like a 22 shell going off, that is taboo. Third, is attempting to expand the jacket way too much in the core seat operation, the core just needs to be expanded solidly to the jacket walls and remove any trapped air, this will also keep lead bleed by to a minimum. Fourth, a common complaint is lead build-up on the punch, caused buy too much pressure and too loose fitting punch.  Fifth, obtain a 10X jeweler’s loupe to be able to see down inside the jacket after seating the core, looking for scraping the jacket and the amount of lead bleed by, if you have a bore scope it is much easier, I used the loupe until I got my scope. Sixth, what one thinks is not enough seating pressure you need to consider the compound leverage and the surface area being worked; it is surprising how much is at the end of that punch. Seventh, at this time I use pure lead and knowing now what I didn’t some 7-8 years ago I would have ½ to 1% antimony in that lead, it just works cleaner, especially in the core swage operation. Eighth, when all is well, all adjustments are finalized and ready to seat the batch take a small dab of lube and rub it on your fingers, not much but just enough so your fingers are not removing lube form the jackets as you pick them up. Now lastly something I adhere to religiously is let the seated cores rest, I allow a minimum of 48 hours, longer doesn’t hurt just don’t go from core seat to point-up in the same day.