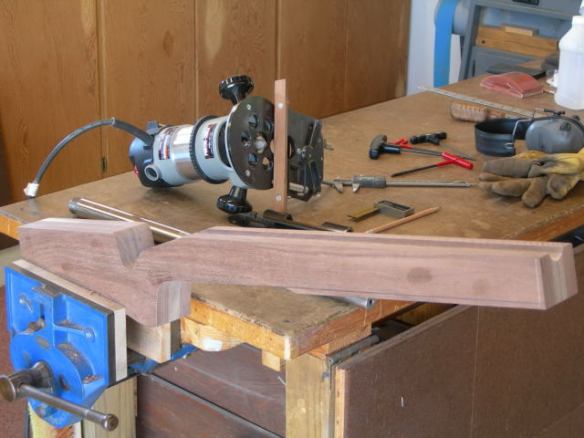 The beginning of my budget F-Class 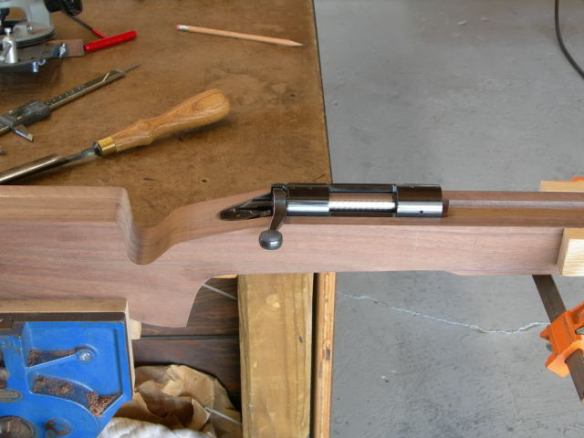 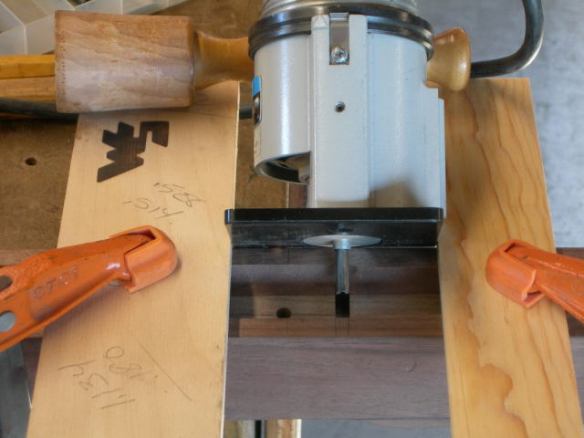 Inletting of the recoil lug 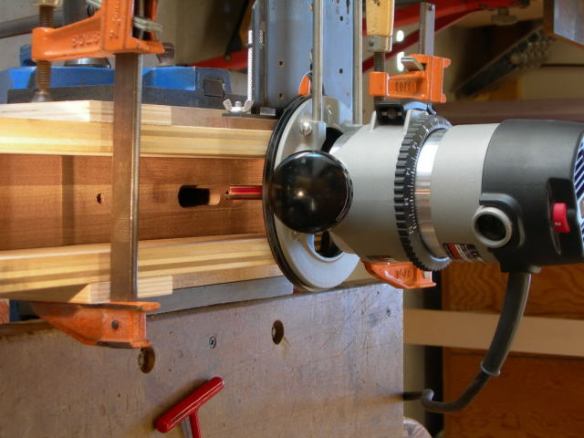 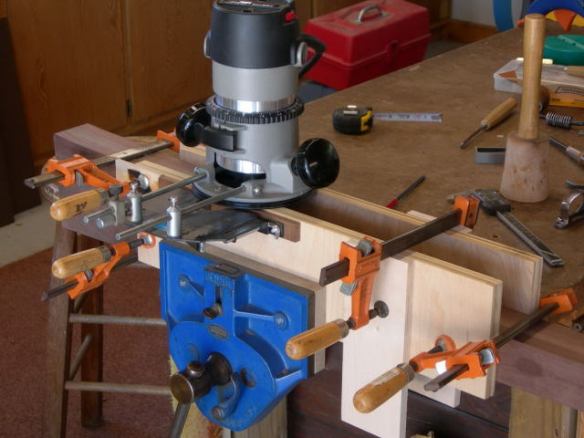 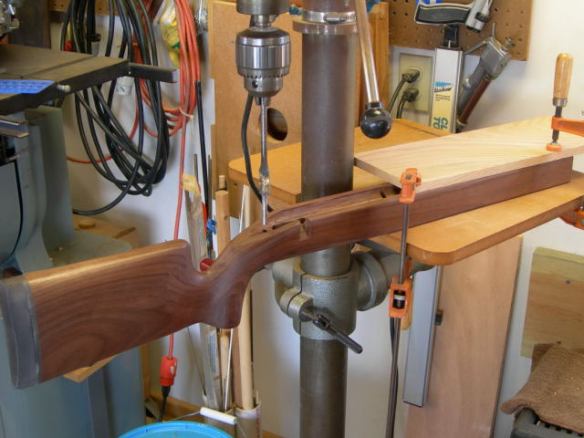 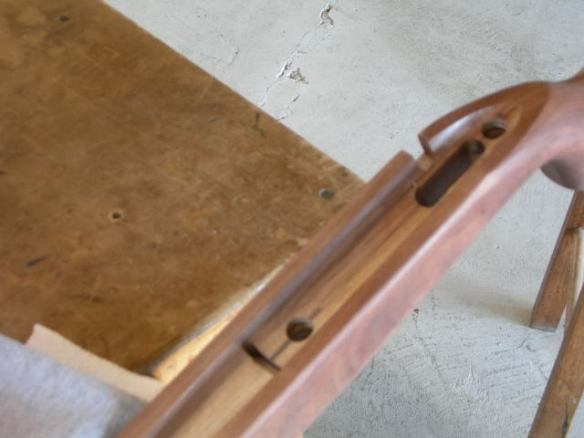 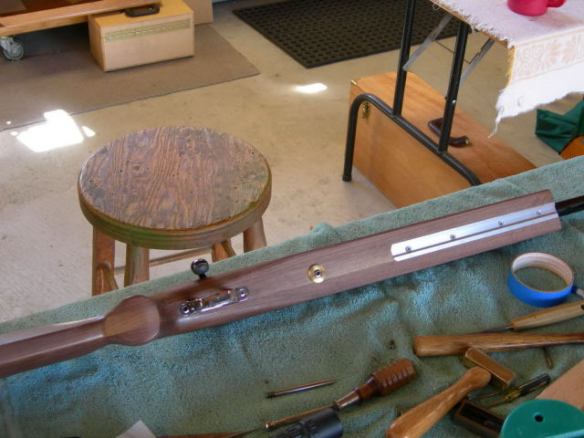 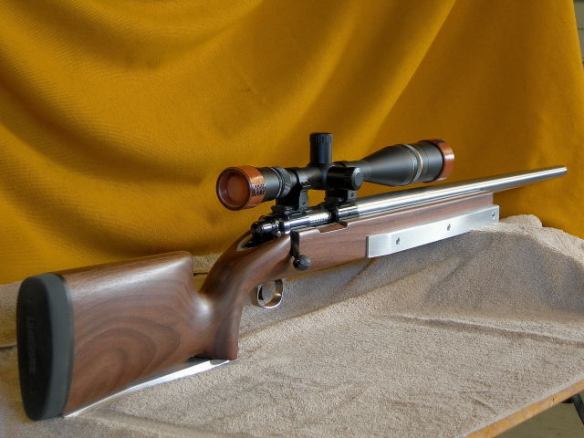 It evolved over 2 years to what it is todayThis rifle was a standard Remington 700 .308 Varmint, the original idea was to play in the F-TR class with a bipod. I originally started the stock with this idea and after the first year decided the 6 BR would be much nicer to shoot, so with that I decided to add the aluminum rails to widen the forearm to 3”. The stock is made of 3 pieces of Walnut laminated, the pattern is a combination of three different stocks and a forearm that is 2 ¾ inches longer than standard. The pillars are 7075 aluminum ¾ inch diameter, and the entire bedding is done in Devcon Aluminum. The inletting was done with a hand held router and some jigs and fixtures, if I had room and the funds I would have a mill but for now we still do it the hard way. The action was trued and lapped, Rifle Basics trigger, McGowen 9 twist stainless hunter taper barrel, (for 95gr. Sierras) 6BR .272 no turn neck and topped with a 8.5 x 25 Leupold. Now for the best part, the budget part, had to purchase the barrel, a McGwoen $155, a FL die from Forester $32, neck/throat reamer from PTG for $66 and a few more small items for a total of $325. I started short range BR game with the 6BR 16 years ago so I had most of what I needed for this caliber, I wanted to build a 6-6.5 x 47 Lapua but after evaluating the cost, short term and long term the 6BR was the better choice, for me that is. Now as for how it shoots, the McGowen barrel has done quite well with the 95’s but haven’t been able to get my own 80’s to shoot yet, the 95’s will take the golf tees out of the target at 200 meters but it needs someone better than myself to steer it. This project wasn’t built to compete, it was built to go out and have fun, learn more about shooting long range, wind doping and all that goes with it. It will probably be used more for coyotes, crows, chucks and punching paper at the club. In my book to be obsessed with winning takes the fun out of the sport, I get more enjoyment in the journey getting there than the actual competing, if I should happen to do well it is just that much more satisfying knowing that it is all my own work that got me there. I ended up spending another $85 on this rifle and in the picture below shows the Holland extended/ swept back bolt handle. The bolt cycling was uncomfortable for the handle was short and bolt timing was off so this up-grade was in order. Before committing to welding the handle on I ordered one from Brownells to make sure it was what I wanted, this also gave me a chance to polish it before sending it off to Dan’s 40X for installation. It is now 3/8 longer and the bolt timing is spot on, I have never been a fan of Remington bolts, Winchester has always cycled better to me and now this Remington is as smooth cycling as any which makes the $85 well spent. 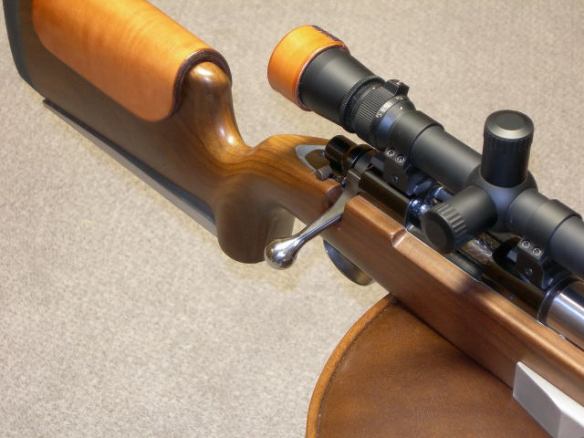